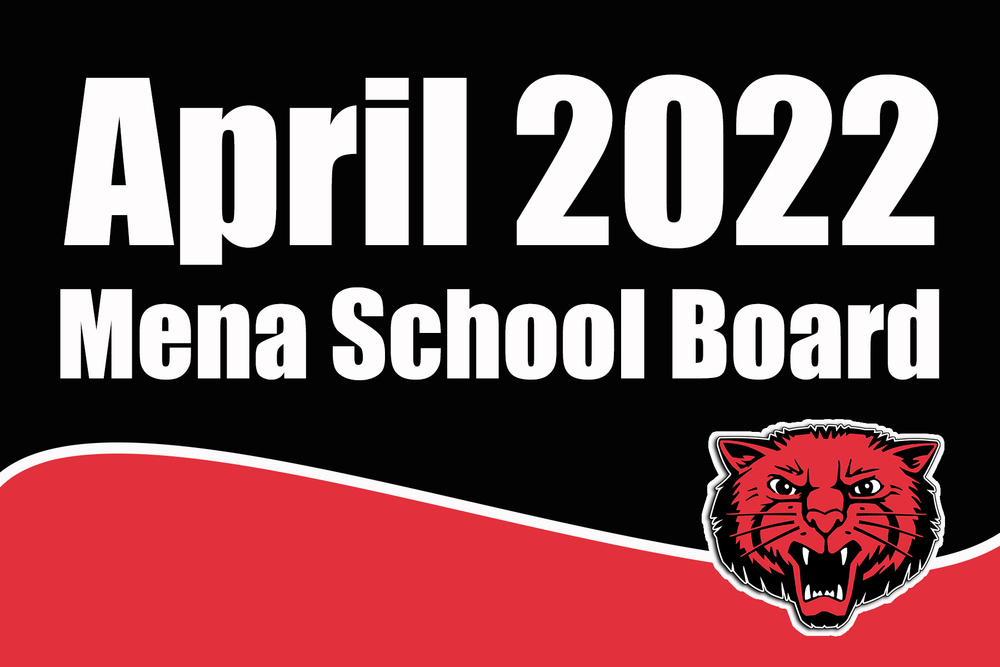 The Mena Public Schools Board Meeting for the month of April was held on Tuesday, April 19th at the Administration Building.

The meeting began with a presentation by Mena Middle School students Allison Howard and Bre Crider. They are both a part of the Girls of Promise at MMS and were accompanied by their sponsor Mrs. Tiffany Luttmer. They spoke on their recent experience at the annual Girls of Promise Conference at the Arkansas 4-H Center! Eighth grade girls from 46 schools across the state of Arkansas attended. The girls met some amazing women who work in STEAM fields and enjoyed fun  activities.

Dr. Lee Smith continued with his superintendent’s report and stated that he expects to suggest a $1200.00 raise in base pay for all certified personnel plus a 2% to 3% increase for classified personnel. After a few final details are completed those raises should be ready for the board to ratify at the May meeting.

Smith also reported that he had met with the district’s construction manager, C.R. Crawford, about the proposed outdoor pavilions to be built on each campus. With an optimistic goal of having those completed by the beginning of the 2022/2023 school year. They also discussed the development of a feasibility study in regards to updates the district would like to make at Holly Harshman Elementary and Mena Middle School as well as a concession building on the visitor’s side at Bearcat Stadium and a multipurpose building.

He then updated the board on turf replacement at Bearcat Stadium. That project is scheduled to begin on May 27th with the paving of the “D”zones to follow.

Smith concluded his report by asking the board to approve the purchase of two mats for the new wrestling program with reimbursement expected through a philanthropic gift to the district. That purchase was approved.

The board next voted to join the Perkins Consortium with the DeQueen Mena Education Service Cooperative. The coop will manage the distribution of funds in the career and technical programs.

Maintenance Supervisor Danny Minton then updated those in attendance on projects that are underway. He stated that the installation of the new central heat and air units is almost complete at Holly Harshman Elementary and Mena Middle School. As well as the ionization machines at LD. Plans for summer projects are now being made including knob and lock replacement at MMS and an extension of the sidewalk on the south end of Bearcat Stadium. Minton concluded by asking the board to approve the purchase of a new Exmark industrial mower from Gilchrist Tractor in Mena for $14,159.25. That was the lowest of three bids and the board approved.

The board then approved the financial reports after Dr. Smith informed them that revenue and expenditures have been normal for this time of year and he expects to finish the year on target.

Finally, in personnel the board accepted the resignation of Randi Brown from the position of Pre-K Paraprofessional. Isaac Minton who taught MMS Health/PE/Jr. Boys Basketball and Abby Grace Minton an Alternative Education Paraprofessional at MMS.

The board approved the restructuring of contracts for MMS Custodian Mitch Milne from 12 months to 9 months. Shanda Craig from HHE Science to a new position as Student Success Planner and Holli Plunkett from LDE Second Grade to MHS Library/Media Specialist.